A man from north Oxfordshire has credited his pet Rottweiler with sniffing out his skin cancer.
Chris Tuffrey, from Banbury, had a mole on his chest for 15 years but “put his head in the sand” and ignored it.
But he said thanks to his dog Beamish “nuzzling and licking” him and trying to lift his arm near the mole, he went to a doctor to get it checked out.
Within a two weeks, melanoma was confirmed by the hospital and the cancerous mole was removed.
Mr Tuffrey said when Beamish began nuzzling him he thought, “what’s wrong with me”.
When he visited his doctor in Deddington and was immediately referred to Oxford’s Churchill Hospital. Within a fortnight, melanoma was confirmed and the cancerous mole was removed.

Mr Tuffrey’s case is not unique. Scientists have found in trials, dogs have detected cancers in the urine of patients despite medical tests giving negative results.
Mr Tuffrey considers Beamish a very special friend.
”He’s absolutely brilliant,” he said.
“He’s a very laid back dog, and I shall be grateful to him for the rest of my life.”

Also checkout other stories of canines’ behaviour as healers: 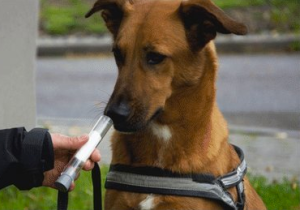