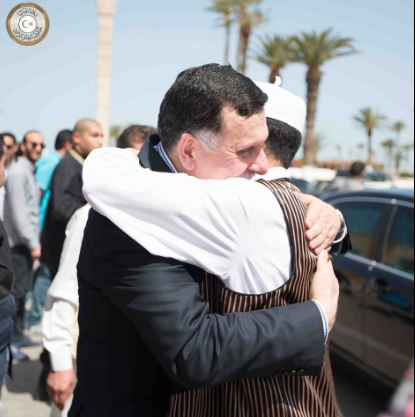 A proud citizen’s humble but Blazing Letter from Benghazi:

I guess I should start by commending you on entering Tripoli as peacefully as possible. In a country where any political move can set off a chain reaction of violence acts, this is a promising achievement.

I have to be honest. The idea of a unity government has never really appealed to me. It is centered on the concept of pandering to a corrupt group of politicians and war lords who refuse to hand over power, and flies in the very face of the principles of democracy that we destroyed our country to obtain. It feels not like achievement, but like blackmail.

But, what is right in theory and necessary in practice are occasionally two very opposite things. I have watched my city become torn apart by extremist groups and plunged into an ugly war. I have seen friends in Tripoli live in fear and dread under militia rule. I have heard heart-wrenching accounts of Libyans in Fezzan as they describe a deplorable way of life in complete isolation from the rest of the country.

For this reason I support you, and I support the Government of National Accord. Not because it is right, but because the current situation is unacceptable and intolerable, and we have no one else.

But trust that is begrudgingly given, Mr. Sarraj, can be easily revoked. You have not one, but two failed governments to learn from. Do not repeat their mistakes, for the appalling state of Libya today lies mainly on their shoulders. The General National Congress allowed itself to become fragmented and manipulated by illegal armed groups, and allied themselves with the devil. The House of Representatives, meanwhile, sat in a safe, stately castle, fanning the flames of war, as they watched Libyans suffer below, ignoring their pleas for help.

I’m sure you have a team of advisers and analysts telling you the same things I’m writing here. But I am writing it to you because I am living in the middle of it. Your success to me will not be a political achievement, it will be the return of life to my city, to my country. And your failure will mean our doom. Whether we want it or not, our lives are intertwined with yours, and my support comes from my sense of self preservation. Don’t ever forget that.

If there is only one thing you can do differently from your predecessors, please make it that you listen to the people. Our demands have become very basic, but that doesn’t mean you should only provide the bare minimum human needs and consider your job done.

Your job is also not to return Libya to the state it was in following the end of the revolution in 2011, because it was that period that eventually got us here. I ask you, on behalf of a nation sick of instability, to be the Prime Minister that finally puts a stop to the “thuwar” mentality. We do not want a revolution, we want a country. Not a country for Benghazi, or a country for Misrata or Tripoli, but a country for everyone.

You and I are both architects. We know how to design spaces and cities for people to exist in, to live in. And we both know that even the best laid designs can fail to meet the needs of the people. We are not asking for fantastical plans and lofty goals; we just want some semblance of normal life. We want to go to work or school without fearing falling missiles. We want to travel without being treated like pariahs in other countries. We want justice, and security, but also freedom. Yes, freedom. We are weak, but that does not mean we want another set of chains on our wrists in exchange for security.

You are in a position of power, and you may be tempted to make restricting decisions. But never forget, Mr Sarraj, that Benghazi, even when broken, will not tolerate those who lord power over it. Work with us, not against us, and let us save Libya together.